How to use the STAR method to succeed in job interviews. 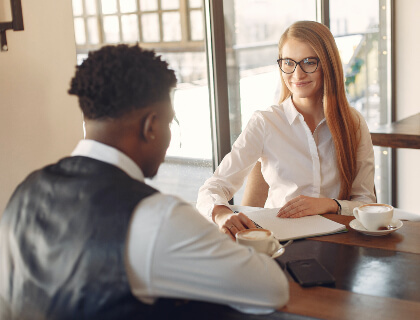 What is the STAR method?

The STAR method is a technique used for answering behavioral interview questions by describing a specific Situation, Task, Action, and Result. It provides a straightforward format for answering interview questions by prompting you to provide real-life examples of how you handled a situation. With the STAR method, you can easily share details in a compelling and meaningful way. It also helps you to stop rambling and stay focused!

When Can You Use the STAR Method?

The STAR method is best used to answer behavioral or competency-based interview questions. These questions focus on how you have behaved in the past and how you handled certain work-related experiences. With these questions, interviewers are generally looking for proof of work-related skills, such as problem-solving, analytical skills, creativity, teamwork abilities, and perseverance.

It is easy to recognize these questions as they usually have openings like:

How to Use the Star Method:

It is important to use the key concepts of the STAR method in the correct order to successfully answer behavioral questions. While there are only 4 letters in the STAR acronym, it is very important to do some preparation when using this method in your interviews.

1. Prepare for your interview.

Most behavioral questions focus on work-related challenges that demonstrate critical thinking and problem solving, leadership skills, and performance under stress. So, before going for your job interview, reread the job description and pick out key skills that you know the company is looking for. Once you have a list, go over your work history and think of any real-life examples that can showcase these skills. Be prepared to give details.

Be sure to choose some examples of when you failed in a task but ultimately learned something or gained valuable experience. It's not uncommon for an interviewer to ask something like, "Tell me about a mistake you've made and how you handled it." or "Tell me about a time when you failed at a task you were assigned." You will definitely want to be prepared for these kinds of questions.

During your interview, the starting point for answering a behavioral question is to use an appropriate scenario that is relevant to the question. Paint a clear picture of the situation you were in or a challenge you faced, describing the context in a concise, focused way. You should emphasize the complexities of the situation but don't go into unnecessary details. Remember to include the basics of who, what, where, when, and how.

The reason you should be telling the story is because you played a key role in it. You should describe the details of your responsibilities in this specific situation as well as any objective that was set for you. Whether you had a short deadline or needed to hit a sales target, describe your task in a concise manner.

Don't confuse this section with the next. You should be describing what you needed to do before you describe what you actually did.

This is where you describe what you did to achieve your task. Showcase what you did by being very specific and contributing detailed steps on how you reached your goal or solved the problem. Also, keep the focus on you (what you did, how you contributed) by using "I" and not "we."

The final part of your answer should detail the results or outcome of the action you took. This is your moment to shine and explain how you made a positive difference. Your result should always be positive, even when answering a question about a time you failed or made a mistake.

The result part of your answer is a crucial step, so don't leave it out! The interviewer absolutely wants to know why this story you just told them matters, so be sure to emphasize any results you achieved or anything you learned and take credit for your behavior. If possible, quantifying your answers with numbers is always a great option.

Question:
Have you ever gone above and beyond to help a customer? What did you do?

Answer:
Situation: My previous position as an innkeeper was at a modest manor house on the outskirts of town. This was not a live-in position. One night, we had only one guest, an elderly lady, and she was uncomfortable with staying alone so far from anyone else.

Task: The guest said she may leave and find other accommodations which would have meant that we would've lost the room fare for the 3 nights she was staying with us. I needed to think of a way to ensure she was comfortable in staying at the manor.

Action: As there were no other guests expected during her stay, I packed a suitcase and stayed in one of the guest rooms for the 3 nights. I also gave her my cell phone number and made sure I was available whenever she needed me or just wanted some company.

Result: Because of my initiative, the guest was able to enjoy her stay at the manor house. Not only did she give us a very positive review specifically thanking me, but she also recommended the manor house to a number of her friends and acquaintances, directly leading to 5 more bookings that season.

Question:
Tell me about a major setback you’ve had. How did you deal with it?

Answer:
Situation: In my current job, I process claims for customers. In one instance, I unknowingly made an error when inputting the client's information. This resulted in pushback from the client and put a lot of stress on my team.

Task: I was determined not to make a mistake like this again and had to come up with a way to ensure that I never did.

Action: I spoke with my manager about different organization strategies that could be implemented to help not only me but other members of my team.

Result: Since I discovered a more efficient way of inputting customer information, I have not made that mistake again.

Question:
Describe a time when you’ve had to sell an idea to your colleagues.

Answer:
Situation: When I was in college, I served on the committee of our theater group. We had decided to hold a fundraiser for community centers that teach theater to children from underprivileged communities.

Task: We chose to hold a concert with a band that had agreed to perform at a discounted rate and had narrowed our choice to two bands. My fellow committee members were leaning towards the cheaper of the two bands, but I wanted to convince them to go with the more expensive band.

Action: I put together a presentation with different sales projections to show them that the more expensive band would generate more interest, and therefore more revenue, as that band was more popular among college students. I showed that the band's popularity would allow us to sell more tickets at a higher price, making up for the initial cost to hire the band.

Result: The committee unanimously agreed with my idea. When the concert was held, we generated a revenue of about $300,000, which far exceeded our initial goal.

Tips for Using the STAR Method:

Things to Avoid with the STAR Method:

What is the STAR method of interviewing?

The STAR method is a structured way of answering behavioral interview questions which prompts you to provide real-life examples of how you handled a situation. With the STAR method, you can easily share details in a compelling and meaningful way.

How do you use the STAR method?

Why is the STAR method important?

The STAR method is useful in answering behavioral interview questions as it helps you to concisely provide concrete examples of your experience and skills without rambling or going off-topic. It also ensures that you fully answer the interviewer's questions.

How an Open Interview Works [includes FAQs]
Best Resume Builder
The Difference Between CVs and Resumes
How to Write a Resume - Step-by-Step w/ Fast, Easy Template
Top Must-Have Skills to Put on a Resume